In this article, we will learn how symmetric-key encryption works from a practical perspective.

In this article, we will use OpenSSL to put into practice some concepts about symmetric-key encryption.

To follow along with this article and run the commands on your machine, you just need a terminal with a recent version of OpenSSL.

In a symmetric-key encryption algorithm, the same key is used for both encryption and decryption. This key is usually called a private key, and should stay private, or the security is broken!

AES is a standard set by the U.S. National Institute of Standards and Technology (NIST) in 2001 for the encryption of electronic data and became effective as a U.S. federal government standard in 2002. It is also the first (and only) publicly accessible cipher approved by the U.S. National Security Agency (NSA) for top-secret information. I will not judge if this is good or bad. :-)

AES is a block cipher and works with blocks of 128 bits. That means it will break the data to be encrypted (cleartext) in blocks/chunks of 16 bytes, encrypt them (block by block), and join the encrypted blocks together to form the ciphertext.

AES keys might have three different lengths (128, 192 or 256). Usually, longer keys improve security, especially against brute-force attacks (though sometimes that might not be true).

On the other hand, the execution might be slower with larger keys. AES for example will execute more rounds with larger keys. Currently, a 128 bits key in AES is considered to be a safe compromise between efficiency and security.

So let’s start by creating a 128 bits key for AES encryption.

An encryption key is just a random string of bits created explicitly for scrambling and unscrambling data. The more random, the better. That is one of the reasons a good random number generator is very important in cryptography.

We could create a key manually by typing any combination of 128 bits (for the purpose of this article, we don’t care much about the randomness of the key). Anyway, it is easier to do this with a tool like OpenSSL:

This command is asking OpenSSL to create a 128-bit AES key (-aes-128-ecb) using a password-based key derivation function (-pbkdf2) and print the key in the terminal (-P).

The password-based key derivation function used is called PBKDF2. This algorithm will apply a hash function to the passphrase given (-k my-secret-passphrase) along with a salt value and repeats the process many times to produce a derived key.

The salt is just random data that is used as an additional input to the hash function. Without it, the same passphrase would always produce the same key!

Now save the derived key in a file:

And we are ready for some encryption!

Let’s encrypt a snippet from The Hacker Manifesto, a small essay written in 1986 by a computer security hacker who went by the pseudonym of The Mentor:

The command below will encrypt the file using AES-128 (enc -aes-128-ecb), taking the input file provided by the -in option, encrypting it with the key given in the -K option and creating an encrypted file called ciphertext.txt via the -out option. Easy, right?

Now if you try to print the encrypted file (ciphertext.txt), you will just see garbage.

In the same manner, we can decrypt the file by passing the -d option:

There is just one problem with what we are doing here. We are using a block cipher mode called ECB (Electronic codebook). The ECB mode leaks information and it is very insecure!

Before explaining the problem, let me show how insecure the ECB mode is.

For the example, let’s take our lovely TUX image:

Download the image and convert it to PPM to make it easier to manipulate the header and the body of the image:

Now break down the file into two parts, the header and the body:

Encrypt the body with AES-128 in ECB mode and add back the header to create a new image with the body encrypted:

Open the encrypted image (tux-ecb-enc.ppm) and see the result for yourself! 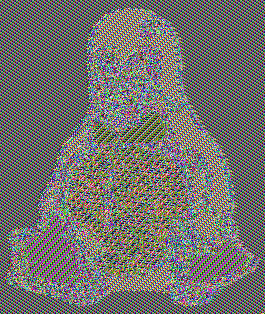 Can you see that Tux is still there? But why?

As mentioned before, AES is a block cipher that works with blocks of 128 bits. In ECB mode, it will encrypt individually the blocks. Blocks with the same content will output the same value!

Although the image is encrypted and we don’t know its contents, we still can see data patterns. That means the ECB mode leaks information, it is very insecure and you should never use it!

If you look at this Wikipedia page, you can see that there are different modes of operation for block ciphers. One of the most commonly used modes is CBC (Cipher Block Chaining).

In CBC mode, one encrypted block (ciphertext) is used as input to encrypt the next block. For the first block, we need an Initialization Vector (IV), a random and unique number usually the same size as the block.

The Initialization Vector (IV) can be generated with the rand function of OpenSSL:

And now the image can be encrypted by passing the -aes-128-cbc mode and the Initialization Vector with the -iv option:

Now add the header to the encrypted image:

And open the encrypted image (tux-cbc-enc.ppm) to confirm that information is not leaking anymore (the image will look like garbage): 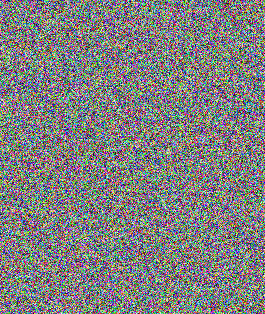 In this article, we learned some concepts about symmetric encryption, using AES in ECB and CBC modes to encrypt and decrypt data. In the next article, we will deep dive into asymmetric-key encryption and digital signatures.