Since version 4.8 the Linux kernel has a new interface based on character devices for accessing and managing GPIO lines in user space.

GPIO stands for General-Purpose Input/Output and is one of the most commonly used peripherals in an embedded Linux system.

Internally, the Linux kernel implements the access to GPIOs via a producer/consumer model. There are drivers that produce GPIO lines (GPIO controllers drivers) and drivers that consume GPIO lines (keyboard, touchscreen, sensors, etc).

To manage the GPIO registration and allocation there is a framework inside the Linux kernel called gpiolib. This framework provides an API to both device drivers running in kernel space and user space applications. 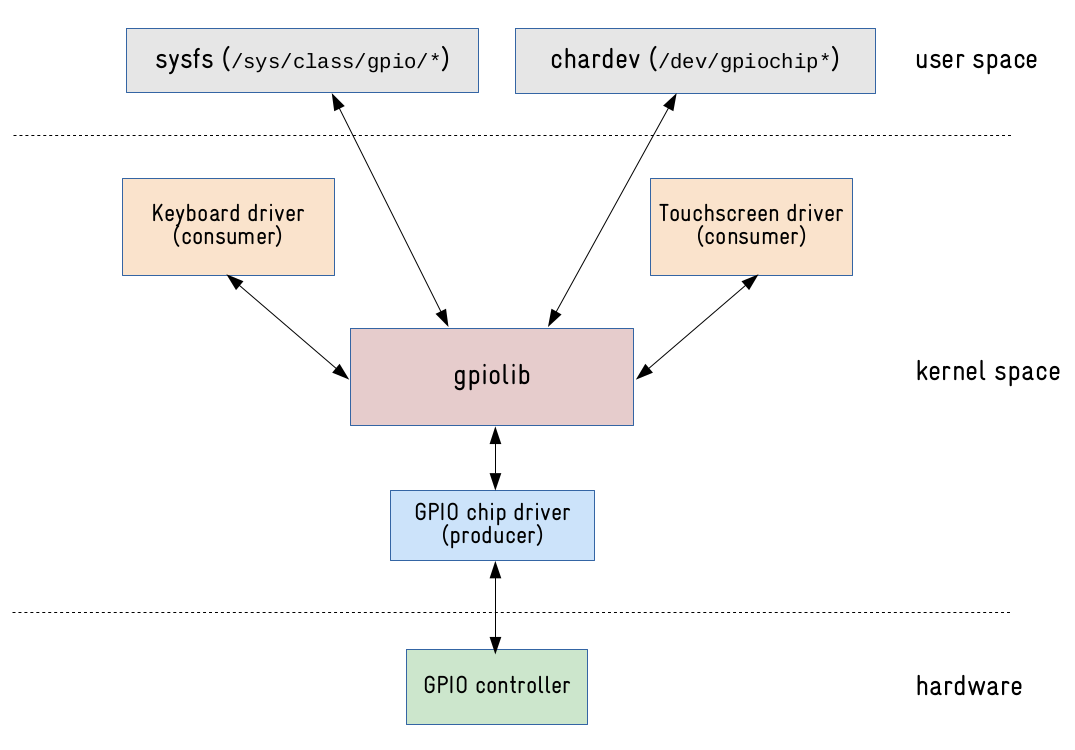 Until Linux version 4.7, the interface to manage GPIO lines in user space has always been in sysfs via files exported at /sys/class/gpio. So for example, if I want to set a GPIO, I would have to:

As a practical example, to set GPIO 504 from user space, we would have to execute the following commands:

This interface is very simple and works pretty well, but has some deficiencies:

Since Linux version 4.8 the GPIO sysfs interface is deprecated, and now we have a new API based on character devices to access GPIO lines from user space.

Every GPIO controller (gpiochip) will have a character device in /dev and we can use file operations (open(), read(), write(), ioctl(), poll(), close()) to manage and interact with GPIO lines:

Although this new char device interface prevents manipulating GPIO with standard command-line tools like echo and cat, it has some advantages when compared to the sysfs interface, including:

To use this new char device interface there is a library and a set of tools provided by the libgpiod project.

For example, the following program in C is using libgpiod to read a GPIO line:

The library is in C but there are bindings for other languages like C++ and Python.

If you want to manage and interact with GPIO lines from a terminal, you can use the command-line tools provided by libgpiod.

The gpiodetect command will list all GPIO chips, their labels and the number of GPIO lines:

The gpiomon command will wait for events on GPIO lines and print them to standard output:

The source code of all these commands is available at the libgpiod repository.

As you can see, the new Linux kernel GPIO user space interface has a very simple, elegant and robust API, and should be used on embedded Linux development from now on.